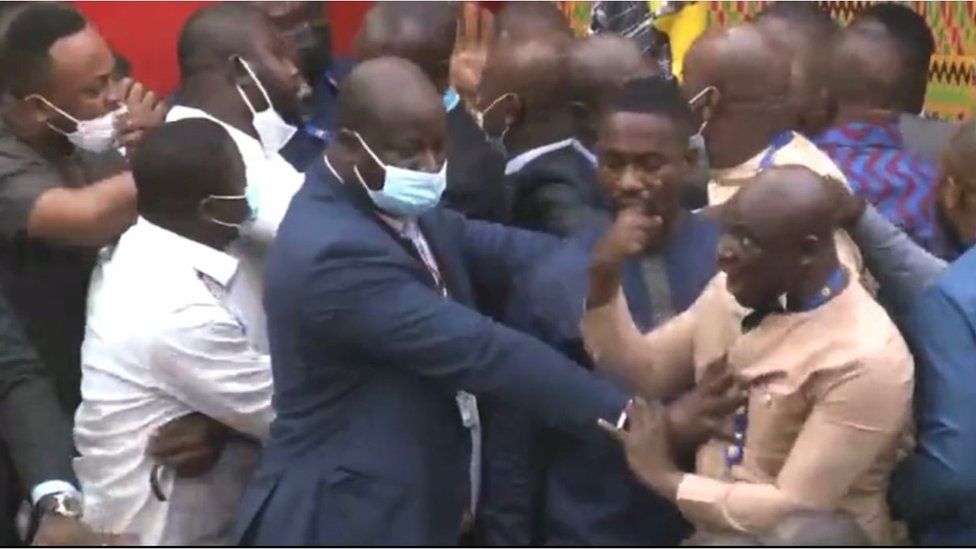 The National House of Chiefs have condemned the scuffle that ensued in Parliament a few days ago among lawmakers.

The President of the National House of Chiefs. Ogyeahohoo Yaw Gyebi I exclaimed that the brawl that was witness in parliament has degraded all chief as well as the ordinary citizenry in Ghana and urged lawmakers to exercise maximum restraint in discussing national issues.

“It is just unfortunate that in recent times our parliamentarians decide to exchange blows on the floor of the House,” the Paramount Chief of Sefwi Anhwiaso Traditional Area said.

He was speaking at the end-of-year General Meeting of the House in Kumasi on Wednesday, December 22.

“This thing does not affect only the parliamentarians but affects Nananom and the good people of this country.”

The brawl erupted in Parliament after the First Deputy Speaker, Joseph Osei-Owusu, stated that he was going to cast his vote as Member of Parliament for Bekwai Constituency on whether or not the Electronic Transfer Levy Bill was to be considered by plenary under a certifcate of urgency.

Mr Osei-Owusu was presiding over proceedings in the absence of Speaker Alban Sumana Kingsford Bagbin, whose whereabouts was questioned by the Majority.

The brawl left proceedings adjourned to the following day, Tuesday, December 21. That day did not also see the Bill considered by plenary as the Meeting was adjourned sine die.

Ogyeahohoo Yaw Gyebi I urged the MPs to resort to dialogue from hence in tackling matters of national interest.

“[I] want to use this platform to urge our parliamentarians from both sides of the House to exercise restraint and resort to dialogue and engagement on broad national issues to arrive at consensus.”

He later added: “We believe they are all responsible people and that is why we call them ‘Honourables’ and they should always jaw-jaw instead of turning the floor of the House to an arena of boxing.”