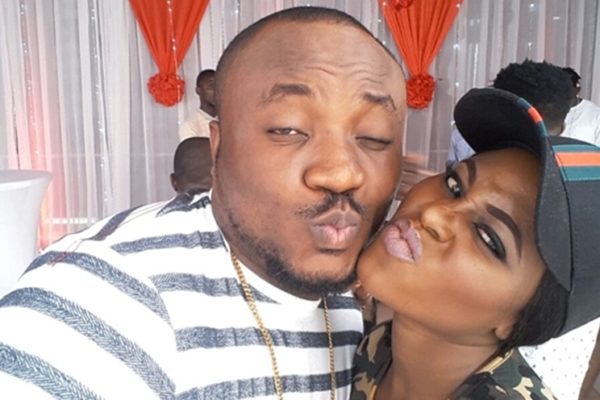 Most male celebrities are not comfortable publicly declaring the women in their lives for personal reasons and Comedian DKB is not an exception.

Since 2012, when Comedian Derick Kobina Boney popularly known as DKB revealed his girlfriend Sharon Mercedes Dzipha, when he returned from Big Brother Africa, he has been silent about his love life after his relationship with the well-endowed Sharon hit the rocks.

The “Comedy Express” star has been spotted with his current girlfriend. He confirmed to Nkonkonsa.com that he has found love again after his past bitter experience but he refused to reveal any information about his new lover.

The two were first spotted together at the Silverbird Cinema at Okyeame Kwame’s “Flaunt Your Lover” movie experience during the valentine season and they were also spotted together last week at the launch of Exclusive Men’s Magazine in Accra.

Checkout pictures and video of Ghana’s King of Comedy and his girlfriend. 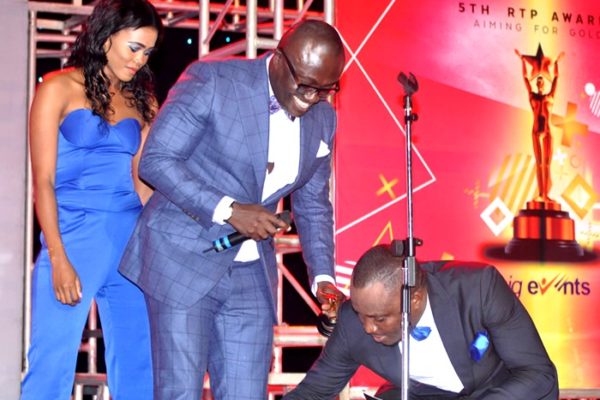 Reigning Ghanaian comedian Derick Kobina Boney aka DKB is surprised some people are criticizing him for cleaning Bolaray’s shoes on stage during the just ended Radio and TV Personality (RTP) Awards.

DKB who was the host of the awards night was seen bowing down to clean popular Broadcaster Nathaniel Kwabena Anokye Adisi aka Bolaray’s shoes when he mounted the stage to accept an award and this DKB said he never regrets doing adding that he would do it for the rest of his life if need be because Bolaray means a lot to him and his career.

DKB in an interview with celebrity gossip website Nkonkonsa.com said people should “shut up” because what Bolaray has done for him none of them would do that especially when he really needed that push but Bolaray was there for him and gave him all the opportunities for him to be where he is now.

“I don’t regret cleaning Bolaray’s shoes on the RTP stage because he deserves my honour. First of all Bolaray was a very big influent to my career. As I speak now I am the best event host and the king of comedian in Ghana and in these two areas he contributed greatly”.

Revealing some of the great things Bolaray did for him in the beginning of his career, DKB said;

“My first ever performance on TV on ‘Music Music’, it was Bolaray who helped me. In fact he spoke to them on my behalf and the audition was very flexible and truly I came out pretty good, and then I was given a chance to perform on ‘Music Music’ that was way back in 2006 and as at that time he could tell that I can be comedian and he gave me the chance. To talk about being an MC, I was a young MC on campus and Bolaray who runs Empire Entertainment puts up a huge stage fully sponsored by big cooperate companies to do artistes night I approached him and the next thing I knew Bolaray brought me on stage to host the show together with him and then he got know I was a good MC. So for rest of my years on Legon campus from level 300 to 400, it has just been me hosting all his events on campus and that made me very popular and people got to know of my talent. In fact it was through that I got my first job in life and also looking at him as a personality, he inspired me to believe that you can make it without being an employee”, DKB recounted adding that he never got the kind of inspiration from family and friends but Bolaray gave him that strong inspiration he needed at the time.

“At the RTP he was the man of the night so why shouldn’t I do this man the little honour of cleaning his shoes? So people should just allow me. In fact I am even ready to watch his singlet and iron his socks. Yes! I am ready to do all that just so people would know that I value him that much and I am that humble to do all that for somebody who has been able influence my career to this point. So anybody saying anything should just shut up. If they don’t know how to appreciate they should allow those of us who appreciate people to appreciate. If you don’t like that person that doesn’t mean I should appreciate him for what he has done for me. I don’t care about how you feel about Bolaray all I care about is what he has done for and my appreciation in return. In fact look at all these he has done for me and money I am making now from all this. And all I have to do it to clean his shoes? Why not? I am ready to clean all his shoes even the ones he hasn’t bought, I am ready to clean all of them and people should leave us alone. They should shut up”.