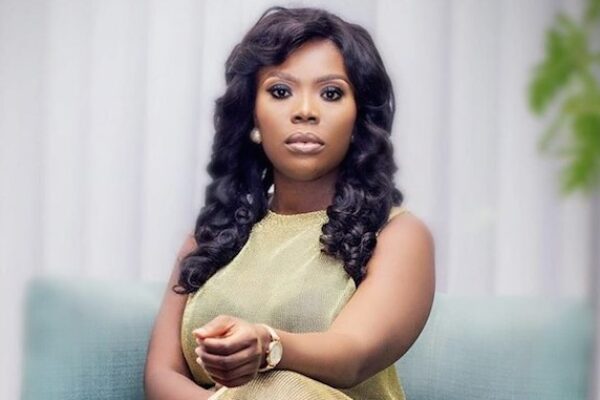 Television presenter and entrepreneur, Deloris Frimpong Manso aka Delay has revealed that he will celebrate the next Valentine with a man who is younger than him.

Delay said this her most recent episode of her talk show whilst recounting the lovely message actress penned to her husband, Cartel Big J.

According to Delay, she spent the entire Valentine’s Day alone in her room, listening to Cecilia Marfo’s songs, which shouldn’t have been the case and it is on this back she has vowed to get fresh blood who is 26 years old for herself to spend the Valentine’s Day with in 2023.

“In all the Valentine’s Day messages that popped up on social media, the one that caught my eye was Selley Galley’s message to her husband. If I sit back and look at how I spent Val’s Day all by myself and alone in the room the entire day, it’s really pathetic. I spent the whole day in a room listening to Cecilia Marfo’s songs. I’ll look for a 26-year-old boy, a fresh blood, to spend the 2023 Valentine’s Day with,” she said. 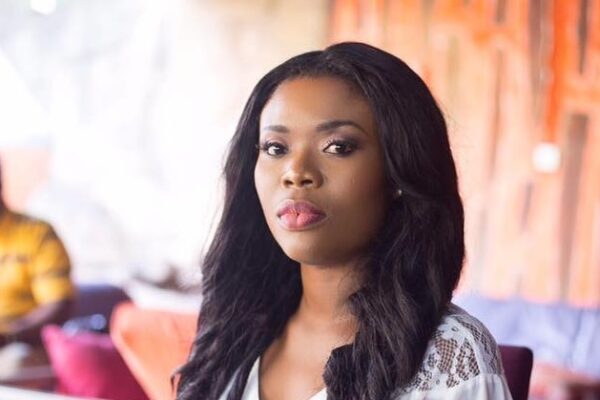 Ghanaian media personality and entrepreneur Deloris Frimpong Manso better known as Delay has taken to social media and expressed hopes of settling down with her soulmate one day.

According to Delay, she is very hopeful of getting hitched by someone very soon.

Recall that early this year, it was rumored that Delay had a family in Germany and had given birth to a baby girl. Two women who claim to be in the same neighbourhood with Delay insisted that they saw her with her protruding belly while she was in Germany.

In a recent tweet she made, the CEO of Delay Foods confirmed that she is single and has not been hitched yet, however, she is optimistic of getting married and starting her own family. 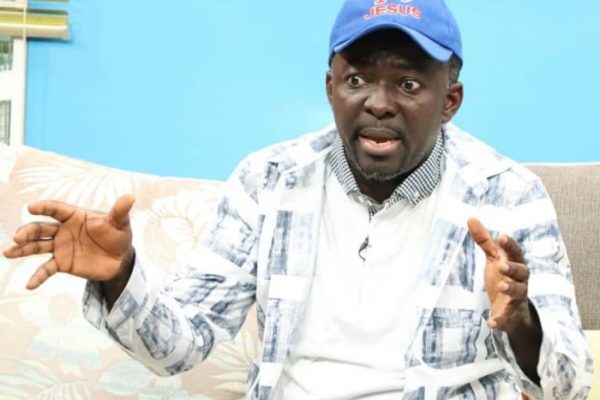 Highlife Musician turned Pastor, Evangelist Papa Shee has revealed that television presenter, Deloris Frimpong Manso interviewed him on The Delay Show several months ago but she has refused to air it for reasons best known to her.

Speaking on “Entertainment Ghana” on Neat 100.9 FM, Papa Shee disclosed that Delay interviewed him about four months ago and she promised to air it specifically on December 24, 2018 but she has refused to show his interview till date because the interview didn’t go in her favour.

According to him if he said something negative that would make her show trend, she would have quickly posted it on social media for views but because he preached the word of God in the interview, Delay has deliberately refused to air the interview for her personal interest.

He has therefore, challenged Delay to air the interview as she promised. 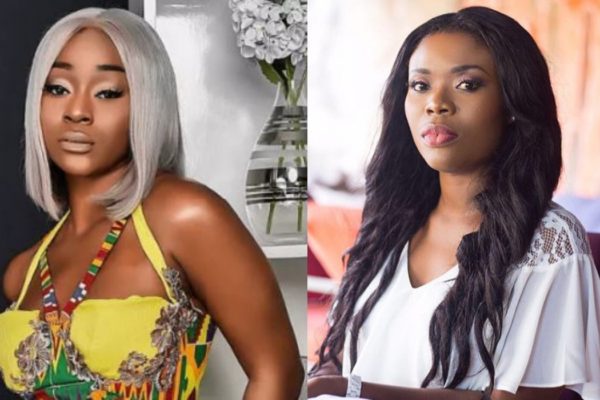 Actress and TV host Andrea Owusu popularly known as Efia Odo yesterday came out to angrily lash out at controversial TV Presenter Deloris Frimpong Manso, known as Delay for involving herself in her relationship.

The actress, 25, did not take kindly to suggestions by the Delay Show host to keep her relationship on the low because the guy she was dating now had massive flaws and could make her relationship go south soon.

On hearing this, “Heels And Sneakers” star took to the micro-blogging website Twitter to call out Delay and suggest she leaves her alone.

She wrote “Dear Delay, I’m sorry I don’t sleep with peoples husband(no shade), that’s why I’m able to show MY MAN to the world. Why should I hide someone I’m so proud of, flaws and all? If a relationship will fail, it will be due to lies distrust insecurities and miscommunication. But we good!” 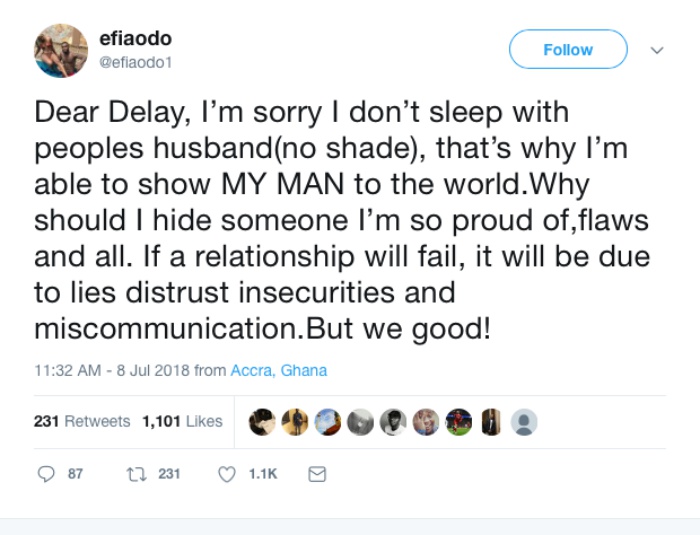 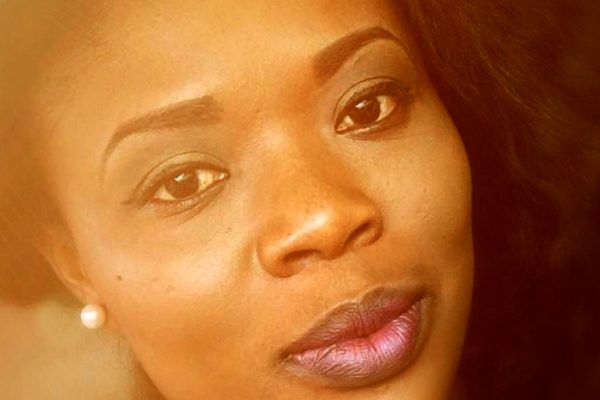 Gospel Singer Joyce Blessing has revealed that TV Host Deloris Frimpong Manso popularly known as Delay, has evil intentions against her and her career.

Speaking on Hello FM Entertainment Review, Joyce accused Delay of editing her recent interview on the “Delay Show” to suit her evil intentions to destroy her music career.

“I am saying emphatically today that my interview with Delay you are watching now is not a complete interview.  Within the interview there was some misunderstanding and I even threatened to stop the interview. This resulted into a heated argument and Delay even used some unprintable words against my husband”.

According to the “Heavy Price” Singer, it was Delay who pressurized her for the interview and she accepted to do it but when she got there, Delay said she is not going to allow anyone to come with me into the interview room.

“She drove everybody out including my manager and my husband and I told her that is unacceptable and because of this, Delay insulted my husband so we had to end the interview in the middle because I couldn’t have just sit down for her to disrespect my husband”.

According Joyce she and team angrily left and Delay said she was not going to show the interview because “the interview is a cursed interview”, adding that she was surprised to hear that the interview had been shown on TV.

“I want all my fans to know that the interview you saw has been purposely edited and Delay told me show will not show that interview because it’s a cursed interview. So I don’t even know why she decided to show it”.

Joyce continued that she is calling on all her fellow musicians especially the the Gospel Musicians not to go on the Delay show because Delay has ulterior motive with the her rude attitude and unnecessary questions.

“You have to watch out because if you go on the program, she edits it to benefit her and she would take out all the important things you said in the interview. She would rather show things that will give her more views and things that would make people insult you. For me, I think Delay want people’s down fall just for her to be popular”. 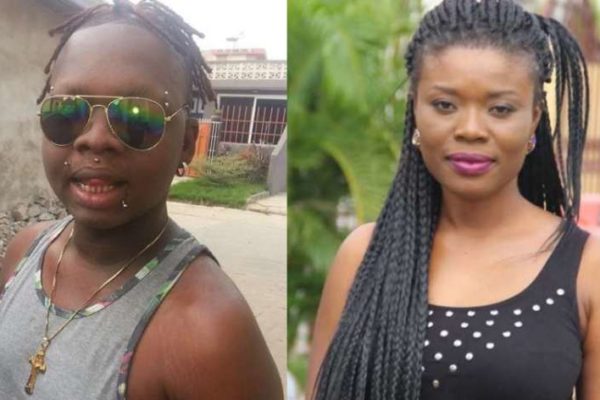 Nana Tornado, a friend of Deloris Frimpong-Manso and a star of Delays’ Afia Schwarzenegger TV series has stated that Delay jumps from one hotel to another seeking for white men.

Deloris Frimpong-Manso and Nana Tornado’s friendship has come to an end–following a message Delay posted on Instagram, claiming she takes nobodies like Tornado and turn them into somebodies.

Tornado who is an actor on Delay’s Afia Schwarzenegger TV Series has thrown shots at Delay, rubbishing Delay’s claims and going on to say she brags a lot when she really has nothing.

In an interview with OKAY FM, Tornado slammed Delay–saying Delay did not do anything for him and that for all the 6 years they worked together, Delay didn’t even buy him a shirt, let alone to pay him. He also said Delay is a braggart.

Listen to the full interview below:

TV Personality, Deloris Frimpong Manso aka Delay has been accused of being disloyal, fake and a big cheat by Nana Tornado.

Nana Tornado, the TV Character with numerous facial piercings starred in Delay’s Afia Schwarzenegger TV Series for 6 years and he has disclosed that he never got a dime from Delay. He emphatically stated that he’s regretted working with Delay.

Delay is said to have said she picks people who are nobody and make them somebody. This her statement flamed up her ‘Star Wars‘ with Nana Tornado

Reacting to the statement Tornado said “when I actually saw this thing on the net, I sent Deloris a message and I quote “point of correction, you didn’t pick me from nowhere, please tell Ghanaians the truth and never compare me to Korkor” … no … nothing came” detailing that Delay read his message but never replied.

Speaking to JKD and Mimi Kay on Radio XYZ, Nana Tornado said he is no longer interested in having anything to do with Delay again because he is disappointed in the later. Mentioning his real name as Emil Wood, he said Former Chief Justice Georgina Wood is her Aunty and stated: “that is the more reason why I feel hurt to hear that someone like me has been picked from the slums”.

According to Nana Tornado, he is starting his own production soon for no one to bluff him because he hasn’t even gotten anything from what he was doing the past 6 years.

“For now I’m also trying to start my own series, I’ve started shooting in Dubai … my own production… so I’m bringing something up soon, so nobody tells me he/she picked me from nowhere because Deloris have never even bought me a shirt before so I don’t know why she has to say that” said Nana Tornado.

He continued that “to tell Ghanaians the gospel truth, I regret being part of Deloris’ life of mirage”

This is not the first time Delay has been fingered as a cheat. Afia Schwarzenegger made similar comments about Delay that the TV personality is an exploit and the two have been at war since.

However, Nana Tornado debunked rumours that he is a gay. He revealed he has a daughter named Francine Wood. Radio and Television personality Deloris Frimpong Manso known in the showbiz scene as Delay, has threatened to sue any industry stakeholders who try to copy her style of presentation.

According to her, she will not tolerate any of the players in the showbiz industry who try to photocopy her or name herself Delay junior or second Delay.

Delay was reacting to comments made by Daddy Lumba’s look alike, Kwame Anokye who is also known as Daddy Lumba Jnr on her show dubbed “Delay Show” last Friday. Delay who takes delight in teasing celebrities on her popular “Delay Show”, took on screen goddess, Nadia Buari regarding her breast.

According to the Delay TV show host, she knows Nadia gave birth recently, so quite strange how her still looks as firm as they are now and that she believes she’s done boobs implant.

“I think she has done a boob implant. I could be wrong but this is my thoughts”, Delay alleged on the “Insta-Glam” segment of her show. She noted that though the breast looks fallen yet it has a surprised look, making it seem real and genuine.

Actor/Comedian/Broadcaster, Seth Kwabena Kyere Karikari popularly known as Koo Fori has finally opened up about the death of his wife after five years.

The “Efiewura” Actor who was speaking in an interview with Deloris Frimpong Manso on the “Delay Show” said it is absolutely impossible to get over his late wife Mary Nana Aba Enchill.

Asked if he has finally gotten over his late wife, Koo Fori said “It’s impossible”. According to him there would always be something or someone who would remind him of his dear wife adding that sometime when there is a storm coming and thunder strikes with lightening, especially in the night, he feels his late wife is lying beside him only to realize it was just an imagination.

He also spoke about some negative comments some people made after his wife’s death with some even accusing him of using his wife for rituals.

“If you are suffering people don’t know. I stayed with her for close to 20 years and we passed through a lot and Ghanaians didn’t realize that and they ended up saying all sort of nasty things but it is life and you to pass through it”.

He stated that his five year old daughter is a consolable replacement for his late wife, adding that a lot of things about her, especially his laughter reminds him of her late mother.

At the time of her death, the Efiewura TV Show star, Koo Fori was in the United States of America.