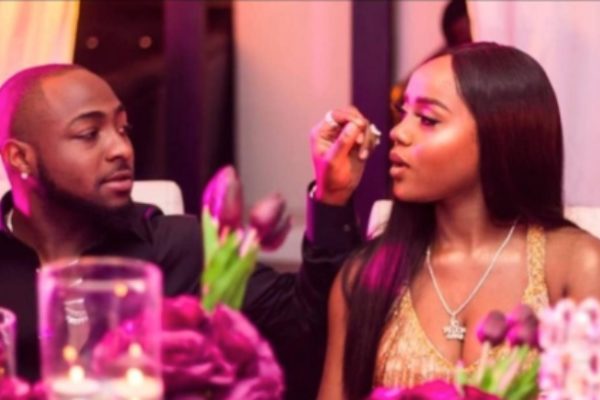 Award winning Nigerian superstar David Adedeji Adeleke popularly known as Davido has publicly declared that he is in love with Chioma Avril Rowland, an Economics undergraduate of Lead City University.

Davido, who said he is not afraid to admit it, disclosed this during Rowland’s pre-birthday party at Cubana Club, Lagos, on Sunday, according to Dailypost Nigeria.

He said, “I am in love. Some people are in love they are scared to say it. I’m not afraid.”

The Afropop singer’s relationship with Rowland, who is also a chef, has made headlines in recent weeks.

Meanwhile, Davido, who has two daughters – Imade Adeleke and Hailey Veronica Adeleke with two different women – announced last week that he will release the ‘biggest song’ in Nigeria on April 30.

The song titled ‘Assurance’ is believed to be inspired by Chioma.

“I’m dropping a single on the 30th of April. It’s gonna be the biggest song in the country. It’s called ‘Assurance’,” he said.

True to his words the single ‘Assurance’ was released on April 30 with an accompanied video which stars Chioma .

The HKN boss, has been teasing fans with a huge announcement on social media that he was about to change his already blessed life. This kept everyone wondering what the big announcement is?

The big announcement was finally made yesterday Thursday January 21, 2016 and the 23-year-old Music star has just signed a lucrative deal with Sony BMG Music for a whopping $1 Million according to reports.

This was how the “Dami Duro” hit maker made the announcement:

ANNOUNCING IN A BIT!! FEELS GOOD TO SEE A MILLION CASH!! @ChairmanHKN

“Thank you God!! Ive worked hard all my life for this day! This is the day that the lord has made!!”

1ST AFRICAN ARTIST TO SIGN A GLOBAL RECORD DEAL !! MY STORY IS JUST STARTING!! MY MOTHER IS SMILING IN HEAVEN RIGHT NOW!! @SonyMusicGlobal

Details of the deal haven’t been revealed yet, but it is definitely a feat worth celebrating.

With him during the signing were his brother Adewale Adeleke (Chairmanhkn) and his manager Kamal Ajiboye.