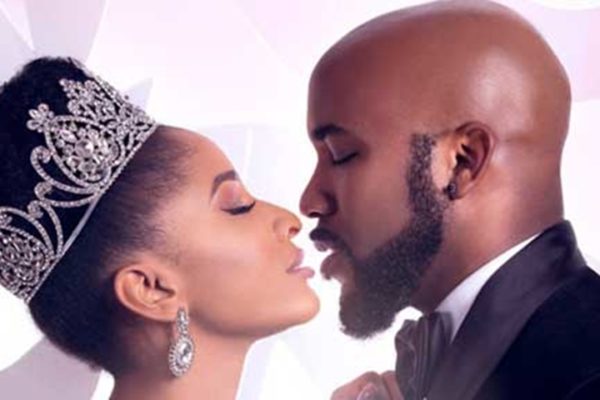 Olubankole Wellington A.k.a Mr Banky W and Adesua Etomi who announced their engagement last week have taken another step in the romantic journey of Holy matrimony.

Banky W and the gorgeous Nollywood actress did their marriage introduction in Lagos over the weekend. This is more serious than you think because these two who has been actually making the headlines in the past few days and has attracted reactions from all over with congratulatory messages from the likes of Don Jazzy and John Dumelo as well as the EFCC lol.

According to sources,Banky W and Adesua are likely to tie the knot by the 2nd week of November 2017.

The source also added that the location of the celebrity wedding is yet to be released to the family members of the couple. For now everything is private to protect the interest of the relationship.

According to Banky W,he knew pretty early in the process that he wanted to spend forever with her and he had prayed fervently about it while he waited for her to catch up.

The singer also made reference to his music video, “made for you” in which he got engaged to Adesua, as well as their roles in the hit movie, “The Wedding Party”, describing both experiences as pure coincidence.

We wish Mr Capable and Adorable Actress Happy Days ahead.

Contrary to the opinion of most African men, Nigerian Musician/Producer Olubankole Wellington popularly known as Banky W believes cooking should not necessarily be a prerequisite for marriage.

In a short clip shared today from an upcoming episode of Ebony Life TV’s Moments Nigeria, Singer/Rapper Banky W said he doesn’t mind doing the cooking in his marriage.

“I cook. My wife doesn’t need to know how to cook. I actually enjoy it.”

When Toke Makinwa, who is a co-host on the show asked if he will marry a girl that can’t cook, Banky reaffirmed his stance, saying “Yeah of course. It’s not a problem.”

The “Yes-No” Singer who is one of the most eligible bachelors in Nigeria has being talking about marriage in recent times. Would the wedding bells be rings anytime soon?

‘Lagos Party’ crooner, Banky W will soon take a break from the music industry, as a recording/performing artiste, to concentrate on finding a woman to marry and build a family.

Banky W, who first revealed his intention to retire in 2015, made his plans known in an interview with Channels Television’s Entertainment News.

News that Banky W was considering early retirement spread like wildfire in June 2015, following a series of tweets, where he revealed he has new projects in the works, as well as his desire to work with Mavin Records boss, Don Jazzy.

Earlier this year, he revealed he would be releasing three albums in 2016. Entertainment News gathered the three comprise of a solo album titled ‘Songs About You’, a joint RnB with Iyanya and a rap mixtape with EME signee, DJ Xclusive.

In the exclusive interview, Banky W made known his desire to have a wife and children, a desire he has decided to actively pursue by taking a break from the industry.

“Living an artiste’s life does not lend itself to (kind of) working on a relationship. It’s tough.

About his impending retirement, it appears it might only be temporary as Banky W stated “Somebody told me that musicians don’t retire. You stop when you have (nothing left) no more music left in you (and) I have a lot of music left in me.”

He noted that he may decide to release music after 5-10 years, adding “I will let the music lead me”.