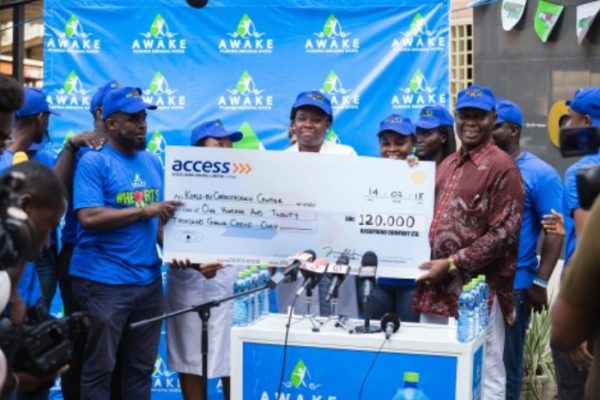 This donation was preceded by the formation of Ghana’s first human charity chain which involved thousands of hands.

Speaking to the press at the donation ceremony, Mr. Richard Adjei, Managing Director of Kasapreko Company Limited, manufacturers of Awake Purified Drinking Water indicated that “Since our ability to make a real impact depends on everyone who drinks Awake Water, we wanted to share this success with all the people who had trusted and supported us, that is why on this Valentine’s Day we have involved communities, friends, families and all people in Accra to be part of our donation to the Korle Bu Cardiothoracic Center”

He further explained that Awake Purified Water’s “One4Life” project had so far saved 30 needy patients at the Korlebu Heart Centre and donated a total of GHC 470,000 to the Cardiothoracic Center so far.

The Brands Manager for Soft Drinks & Water at Kasapreko Company Limited, Mr. Chris Addo-Sarkodie in shedding more light on the charity focus of Awake Purified Mineral Water noted that the human charity chain and the donation was a way of demonstrating to Ghanaians that their 1 pessewa contribution to the National Cardiothoracic Center per purchase of a bottle of Awake Purified Drinking Water was being used for its intended purpose.

The human charity chain stretched from the Kasapreko Headquarters to Korle-Bu and it was a seeing people joining hands and hearts to show togetherness and inspire the sense of communism Awake Water embodied.

The GHC 120,000 donation which was made under the “One4Life” campaign was in respect of contribution made in the last quarter of 2017