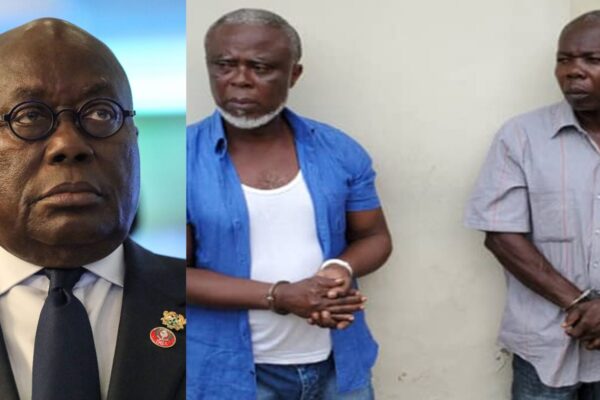 Staff Sergeant Awarf Kojo Sule of the Ghana Armed Forces’ Defence Intelligence Department told the High Court in Accra that when President Nana Addo Dankwa Akufo-Addo was captured in an alleged coup, he suggested that he be kept in “his unfinished building” at Adenta Housing.

Staff Sargent Awarf Sule also told the court how he recruited military personnel to pretend to be interested in an alleged coup when he was contacted.

He also told the court how he drew the map that was supposed to be the guide for the alleged coup in his Evidence-In-Chief to the court in an ongoing trial where Dr Frederick Mac-Palm, ACP Benjamin Agodzor, and eight others are standing trial.

The witness stated that he had all of these meetings recorded, both audio and video, while being led to give evidence by the Director of Public Prosecutions, Mrs. Yvonne Atakora Obuobisa.

“We also discussed where we will send the President and his administrators if they are apprehended.”

“I suggested to the court that I have an unfinished building at Adenta Housing, and WOII Esther Saan suggested again that ‘that man must be killed,” he said.

The witness stated during his testimony before a three-member panel of the court presided over by Justice Afia Serwah Asare-Botwe that “sometime between April and May 2018, WOII Esther Saan contacted me on phone and asked me to come to her house for a discussion.”

“I inquired about the purpose of the meeting, but she did not disclose it during the phone conversation,” he said. So I went to her house at the military academy training school, Teshie Camp. When I went there she informed me that a certain doctor wanted to meet us at Next Door beach for a meeting.”

According to him, “We drove in our separate vehicles to the said location. When we arrived I saw two people so we greeted and sat. The first person introduced himself BB alias Mr. Bright. Bright in turn introduced the second person as Dr. MacPalm, a doctor at citadel hospital, Alajo.

“Following that, the doctor informed us of his plans to overthrow the current government.” He stated that the NPP and NDC have failed the youth of this country, which is why he needs our help to carry out his plan. He requested that WOII Esther Saan and I recruit soldiers as personnel to aid in the coup detat. He also promised us positions in his administration if he is elected. The meeting lasted about 30 minutes, and we all left after a few drinks.

The next morning, I went to Ashaley Botwe to inform Col. Ansu (rtd.) of what had happened between me, Dr. MacPalm, and Bright.”

They’ve all pleaded not guilty to charges ranging from conspiracy to commit a crime to high treason, treason, and abetment.