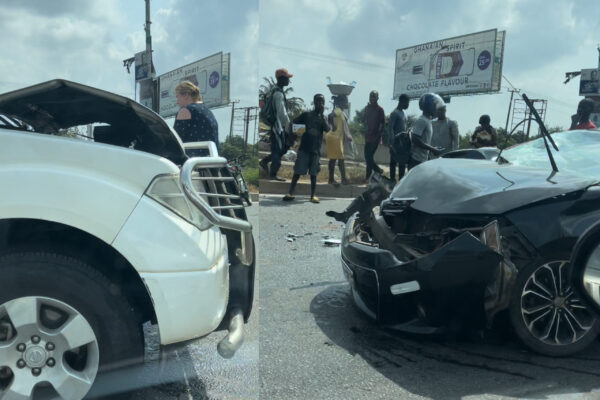 Reports rife on the internet indicates that at least two people have perished after a black Toyota Corolla with registration GR 2960-17 heading towards Madina from Accra collided with A white Nissan Patrol Pickup truck.

Eye witnesses to the accident mentioned that the driver of the Toyota Corolla who was on top speed lost control, veering off his lane into the the lane of the Nissan Patrol which was moving in the opposite direction(from Madina to Accra).

Two other cars also had some minor damages due to the head-on collision.

According to Ghbase.com the incident took place on the main Madina-Accra highway just about a 100 meters away from the Okponglo traffic light around 10:20am on Tuesday.

Some of the victims who got injured were quickly rushed to the nearest health facility for medical attention.

Our source after arriving at the scene where the incident took place filmed the area.

JUST IN: At Least Two People Feared Dead In A Accident At Okponglo After Toyota Corolla Collides With A Nissan Patrol Pickup Truck(Video) pic.twitter.com/eZfYhYd6vT 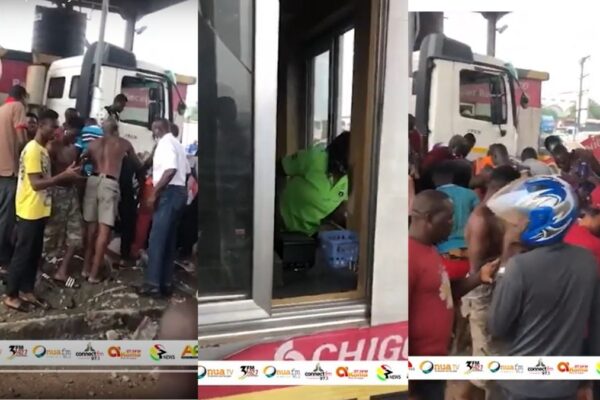 Two tollbooth attendants have reportedly lost their lives after a tipper truck run into the tollbooth on the Tema Motorway in Accra.

NKONKONSA.com did not ascertain what caused the truck to crash into the toll booth killing two people and destroying the structure.

In a video sighted online, some nearby standers and road users had rushed to the scene trying to rescue the accident victims and it appears some had died on the spot whilst others were severely injured.

Our sources learned that the driver of the Tipper truck was nowhere to be found after the accident.

The eyewitness added that as of the time of filing the report(7:45am) both the Ambulance Service and the Police were yet to arrive at the scene.