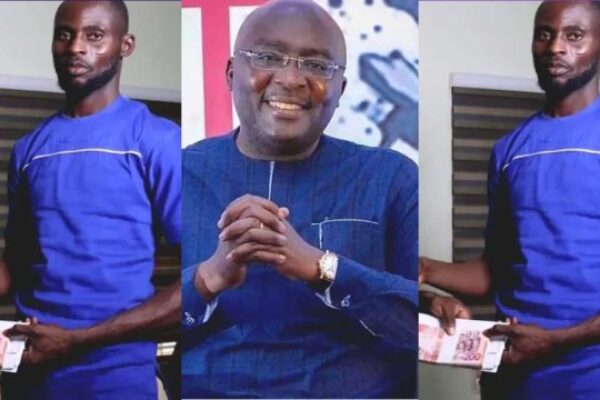 When taxi driver, Kwesi Ackon, returned GH¢8,400 a passenger left in his car, he did not know that his honesty was about to pay off.

Vice-President Dr. Mahamudu Bawumia donated GH¢20,000 to him after his act of honesty went viral.

On Wednesday morning, a video surfaced on social media of the moment Mr. Ackon returned the money to the owner. The owner of the money and her family are seen in the video weeping and thanking the taxi driver for saving their lives.

One of them is heard saying they could not sleep because of the missing money.

Touched by the video and the taxi driver’s honesty, the Editor-in-Chief of The Fourth Estate, Manasseh Azure Awuni, suggested on Facebook that something be done to reward the taxi driver beyond words of appreciation.

Among them was Vice President Dr Bawumia, who donated GH¢20,000 to reward Mr. Ackon for his honesty and exemplary show of integrity.

Manasseh presented an additional GH¢2,500 from two other unnamed donors, making the total of GH¢22,500.

It pays to be honest, they say. But Kwesi Ackon did not believe it can be that literal.