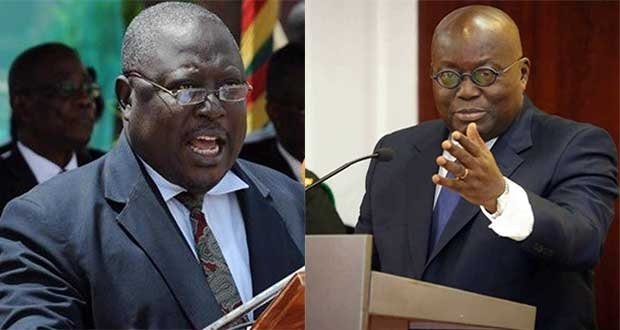 Ex-Special Prosecutor, Martin Amidu has attributed the rejection of the 2022 Budget statement to the arrogance and impunity of power by the President of Ghana, Nana Akufo Addo.

In his latest piece of article, Amidu said “The Parliamentary vote of rejection of the 2022 budget demonstrates what the arrogance of power and impunity can do to any Government that takes the electorate for granted as rabbles.”

“The level of the arrogance and impunity of power exhibited by this government leading up to the rejection of the 2022 Budget Statement and Policy by Parliament is demonstrated by the stubbornness of even refusing to listen to its security and intelligence non-governmental organisation, the Danquah Institute when its director called on the Government to withdraw the E-levy and rethink the whole concept. The corruption of power made the government continue insisting on consulting stakeholders, including the minority in Parliament, only after Parliament had been seized with the budget for approval or rejection.

“The corruption of, and intoxication with, the arrogance and impunity of power became more manifest when Parliament was in session to decide whether to approve that budget. One cannot fantom the extent of the internalisation of arrogance and impunity of power that emboldened the Minister of Finance to ask the Speaker to stand down the already over delayed on-going proceedings of Parliament for the Minister to consult the leadership of Parliament before taking the vote,” he said.

Akufo-Addomartin amidu
Previous ArticleYOU THOUGHT I WOULD DIE WHEN YOU DUMPED ME BUT I’VE MET SOMEONE BETTER’ – Xandy Teases Kaninja In New VideoNext ArticleIF YOU WANT TO BEEF ME, TALK TO MY MANAGER TO BOOK FOR A SCHEDULE, I’M TOO BUSY – Mzbel