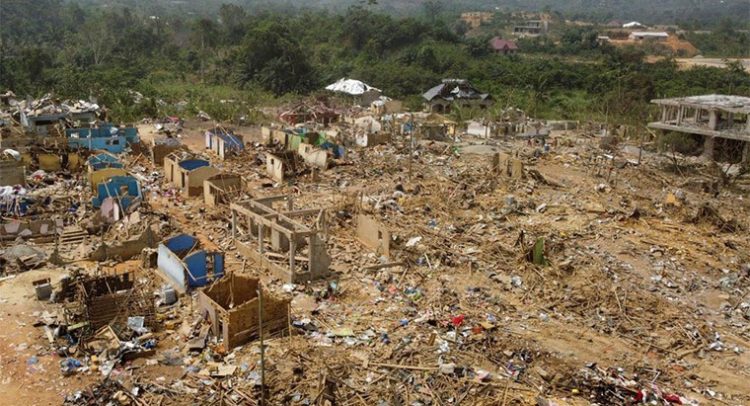 The Ministry of Lands and Natural Resources has fined Maxam Company Limited, whose vehicle was involved in the fatal explosion which flattened the Apiate town in the Western Region, a sum of $6 million.

The announcement was contained in a comprehensive release signed by the sector minister, Samuel A. Jinapor.

The minister’s action followed the submission of a report by a three-member committee on Tuesday, February 1, 2022, empanelled to independently carry out “investigations to corroborate or otherwise, the findings of the Minerals Commission.”

The sector ministry’s fine and other actions are propelled by “regulatory breaches on the part of Maxam Ghana Limited (hereinafter referred to as “Maxam”), in respect of the manufacture, storage and transportation of explosives for mining and other civil works,” the release said.

Although the breaches as per L.I. 2177, attract fines ranging from six hundred cedis to ten thousand United States dollars, the minister stated that given the circumstances leading to the tragic incident, “I, as the Minister responsible for Lands and Natural Resources, and therefore the overseer of activities in the sector, have imposed an administrative fine of the equivalent of one million United States Dollars (US1,000,000), at the prevailing commercial rate, on Maxam.”

In addition to the fine, the release points out that, following extensive discussions with the company “the company will pay to Government, the cedi equivalent of five million United States dollars (US$5,000,000.00) also at the prevailing commercial rate.”

The minister explains though that “for the avoidance of doubt, the total amount payable by Maxam to the Government stands at six million United States dollars (US$6,000,000.00) or its equivalent at the prevailing commercial rate.”

MAXAM FINED $6 MILLION BY GOVERNMENT OVER APIATSE EXPLOSION
Previous Article“EBONY IS A LEGEND, SHE CREATED A PATH BUT HER DEATH CAME TOO EARLY” – Kelvin BoyNext Article“YOU WILL ALWAYS BE IN MY HEART BECAUSE IN THERE YOU ARE STILL ALIVE” – Bullet mourns Ebony’s 4th Anniversary