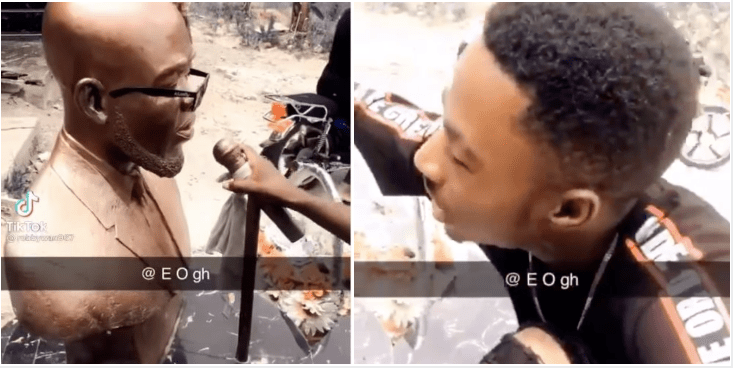 An unidentified young man who has no respect for the dead filed himself slapping and mocking the statue of late Highlife legend, Kofi B.

In the video, the young man could be heard saying he comes from the same town as the late Kofi B and since he is gone, he should transfer all the knowledge he had in music to him.

While saying these, he showed no sign of remorse forgetting that death is inevitable and no one can tell what will happen to his corpse when his time is due.

As it stands, no one can say on authority what the young man wanted to achieve, but chances are higher that he wanted to make it into the news if not he might be suffering from Abena Korkor’s bipolar or schizophrenia!

Young Man Records Himself Slapping The Hell Out of Late Kofi B’s Statue
Previous ArticleKWAKU GYASI IS A WICKED CHEAT, I WILL ONLY WORK WITH HIM AGAIN IF HE DIVORCES HIS WIFE – Producer John MensahNext ArticleSAD SCENES AKUAPEM POLOO AND HER MOTHER BREAK DOWN AT HER FATHER’S FUNERAL (PHOTOS