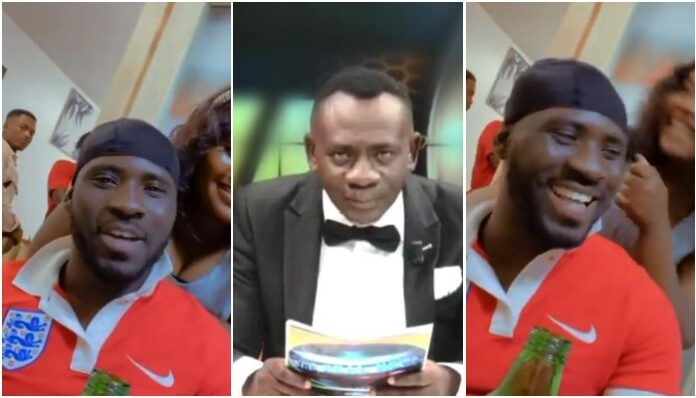 Richard Kwaku Kyere Boadi, the eldest son of legendary Ghanaian actor, Akwasi Boadi popularly called Akrobeto has opened up on his family and his relationship with Akrobeto.

Blogger, Zion Felix got up close and personal with Richard Kwaku Boadi in Gent, Belgium where he is currently living with his wife and kids.

According to Richard, he knows his father has three children but he is not certain or can’t confirm if he has three secret children elsewhere.

He stated he would have asked his father if they have any other siblings elsewhere if the interview was held earlier before he communicated with him.

Kwaku also talked about how his granny, whom he was named after, took very good care of him before he travelled outside the shores of Ghana. He revealed that he traveled to Belgium at the age of 23.

akrobeto son
Previous Article“I WOULD STILL HAVE MADE IT WITHOUT THE SUPPORT OF GHANAIANS” – SarkodieNext ArticleIF YOU DON’T VOTE OUT THE NPP IN 2024, THEY WILL ‘CHOP’ ALL THE STOLEN MONEY- John Mahama