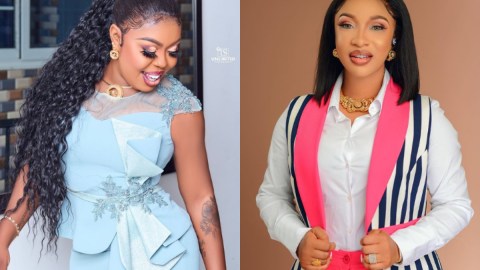 Actress and wife of Choirmaster/Praye Honeho Beverly Afaglo have indicated on a television show that she is not friends with Praye Tietia’s wife, Selly Galley.

Beverly Afaglo who was a guest on the ‘United Showbiz’ program on UTV hosted by Abeiku Santana, claimed she has no relationship with her colleague actress, however, they are not enemies either.

On the same platform, she explained herself concerning the circulating video where she was spotted boasting of her wealth and properties, an act that led her to a controversial path with trolls.

This was what she said;

“I will not retract this statement anytime, any day because I didn’t lie. So Ghanaians twisting this story saddens me. First and foremost, they didn’t even start the reason why I did this video. My marriage was on the attack. I went to a radio show, I can’t remember who, and the host asked me that nowadays I frequent London a lot. And rumors have it that I may have a boyfriend or lover there who pays for my ticket.

“I thought it was a joke. The next thing, it has been published on tabloids and everywhere. And I said, what kind of joke is this? How much is a ticket to London? They talk as if I am unemployed or I can’t afford a plane ticket. Why should a man sponsor me before I can travel? So I got angry, and I wanted to spell it out.”