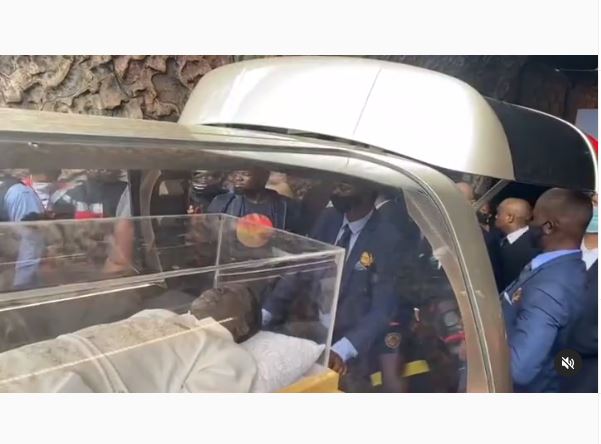 The General overseer of f the Synagogue Church of All Nations Church, Temitope Balogun Joshua popularly known as T.B. Joshua has finally been laid-in-state in Lagos, Nigeria.

Prophet TB Joshua died on 6th June 2021 at the age of 57 following a short illness and the T.B Joshua Ministries had announced that a week-long funeral would be held for him

The cause of his death remains unknown but reports suggested that the man of God had been flown to Turkey to undergo treatment after he suffered a stroke two months before his demise.

We have sighted a series of videos shared by Nigerian journalist, Chief Dele Momodu on his verified Instagram page that captured some moments where the remains of the renowned clergyman laid inside a transparent glass casket was being taken round inside the Synagogue Church auditorium whilst a procession of family, friends and church members is seen in the video following the casket.