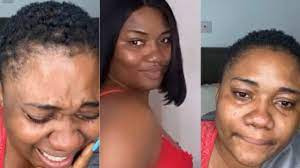 Ghanaian socialite and former TV3 presenter, Abena Korkor broke down once again whilst speaking about some life choices she made that she has regretted in.

Abena Korkor revealed in almost 15-long video that she got involved in some things such as drug trafficking and having amorous affairs with married.

She also subtly responded to allegations by controversial activist, Kwame A Plus that she masterminded the slander against GhOne TV host, Serwaa Amihere by conspiring with a faceless Snapchat account identified as Bombshelli Sel to tarnish her image.

According to her, she does not recognize herself as such a person whose mindset is people’s downfall and further disclosed that at a point she committed suicide

“I just trying to you know, I’m figuring out like when did this all start? When did this have to be part of my journey?… I even got to the point this morning where I even thought of killing myself this morning because it is like I’m tired. I’m tired, this world is not good for good people…”.