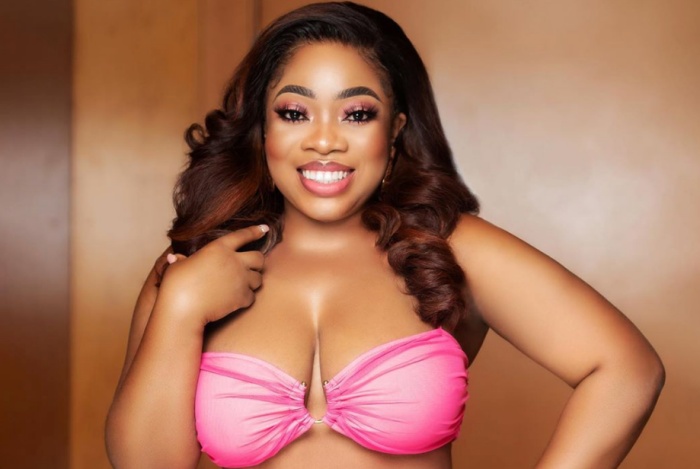 Family of Ghanaian actress and former slay queen, Moesha Boduong has released an official statement on her present state following reports of attempted suicide and loss of her properties after her acclaimed repentance.

You would recall that Moesha Boduong told some people in a viral video that she is born-again and apologised to Ghanaians for hooking young girls to rich married men and claimed that some big men only exchange their destiny and with little money after residents of an area rescued her from throwing herself to the ground from a storey building.

In a new development to all this issue that has still remained a worry to many Ghanaians, the family of Moesha Boduong originally known Maurecia Babinoti Boudong has issued a statement privy to NKONKONSA.com.

In the statement, they stated that Moesha has the right to a new beginning in Christ and a chance to make right her life and they support the decision she has taken in any positive way to help her find her real self.

They rubbished an audio recording making rounds online purporting to be Moesha’s brother and condemned the contents in the audio as they established that the supposed Nelson is not related to their family.

The family beckoned Ghanaians to let Moesha heal and give her the space to have a positive fulfilling and effective beginning for her.

We issue this statement as family of MAURECIA (MOESHA BOUDONG)

Everybody has a past, a present and a future. We have all lived life’s that, depending on the “friends” or “people” around you, can positively or negatively influence your life. Some have lived high life’s and others have lived practical life’s.

No matter what happened or where Moesha has been and no matter whom she has “used” or “offended”, we believe that there comes a time in life when realisation sets in or a time when you “wake up” from your past and try to make good your life.

We believe Moesha has the right to a “new beginning in Christ” and a chance to make right her life. We are pleading with all persons to please allow her time from gossip, bad mouthing, social media bickering and negative talking to find herself.

We support the decision she has taken and will support her in any positive way to help her find her real self.

No persons have been authorised to solicit for funds to support her or on behalf of the family. However the family is extremely grateful to everyone who reached out genuinely to help.

We further note with disappointment an audio recording circulating on social media purported to be her brother. We condemn the contents of the recording and state categorically that it is not her brother. The supposed Nelson is not a known relative of the family.

Let’s let Moesha “heal” peacefully and let’s give her space from all networks to enable a new, positively fulfilling and effective beginning for her.

Everybody deserves some privacy at one time or the other in life and this is the least we can offer Moesha now. #givemoeshaabreak