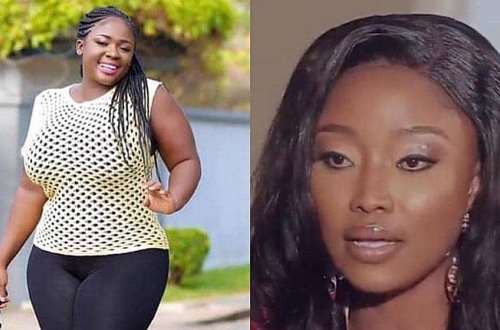 Actress Joyce Boakye has thrown shots at a certain female celebrity who parades herself as richest and most successful personality in Ghana, guess you know who.

In a video shared on Instagram, Joyce Boakye was heard lashing out at the said celebrity saying she knows exactly how the person became rich.

According to Joyce, the person holds no right to call other personalities unsuccessful when she knows very well she sold her body to be where she is today.

The actress added that not everyone has the courage to sleep with men for favors or cash gifts like the lady has been doing so she should not tease women working hard to make a living.

Joyce did not mention anyone in particular but hinted that she is not in good terms with this fellow and the person acts as if she is on top of the world.

To make it easier for people to point fingers, Joyce Boakye said this lady had the courage to sleep with a friend’s husband and forced the man to divorce her friend.

That description sounds familiar in the country, there is a certain East Legon landlady who allegedly slept with her friend’s rich husband and forced the man to divorce her friend.

joyce boakyeTracey Boakye
Previous ArticleMAJID MICHEL UNVEILED AS AMBASSADOR FOR REAL ESTATE COMPANY, PROPTISGHNext ArticleGHANAIANS WILL ONLY PAY TAX WHEN YOU CUT DOWN YOUR EXPENSIVE LIFESTYLE – Sam Korankye To Government