Actress Xandy Kamel said she never felt loved or sexually satisfied in a marriage she almost lost her life savings on.

Xandy, the ex-wife of Sports broadcaster Kaninja, alleges she was the major funder of her May 2020 wedding but never experienced happiness or tranquillity.

“I spent a lot of money on it, and my partner turned against me. He joined the body shamers. It broke me, I felt cheated. The ‘Aggressive Show’ with Kwaku Manu, Xandy claimed it was like marrying his enemy.

According to the actress, she overlooked all warning signs in her relationship since she was hopelessly in love.

Initially, she wasn’t worried when her spouse didn’t give her anything.

Xandy never got a major surprise from Kaninja, despite her best efforts. Her difficult divorce taught her a valuable lesson in life: prioritizing yourself.

“Now I see well. Now that I’m alert, all I have to do is keep working to support my mother and siblings… I used to care more about others. So I wasn’t focused on protecting my assets or supporting the family. My whole focus was on the guy I was with. “I couldn’t even buy myself pants, I was buying for my man,” she said.

She admitted that both parties made faults that caused her marriage to fail, but she never insulted her husband.

“My marriage was immature. There was pride, ego, and action. “I am not flawless, but I did not insult my husband,” she said. 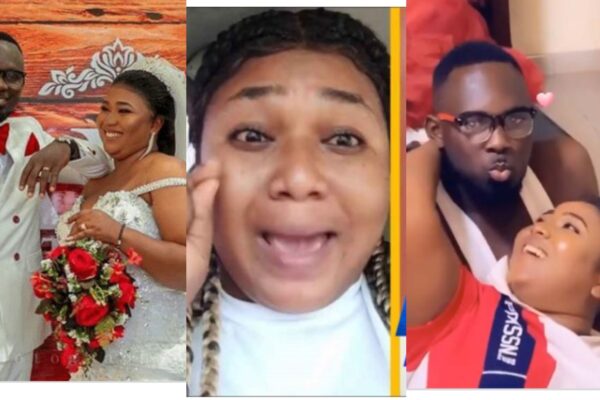 Actress Xandy Kamel has finally revealed that she was the main financier of her wedding with her former husband Kaninja.

She claims she never felt love or sexual satisfaction in a marriage she probably spent all of her life savings on.

In an interview, the actress stated that she spent a lot of money on her wedding in May 2020, but that she never felt happy or at peace as a result of the failed relationship.

“I spent a lot, a lot of my money went into it… in all these, my partner turned against me. He joined people to body-shame me. It really broke me, I felt like I have wasted money. It felt like marrying my enemy,” she said in an interview with Kwaku Manu on the ‘Aggressive Show’.

During the interview, Xandy stated that she was unconcerned about her relationship’s red flags since she was madly in love with the Sports presenter.

Xandy said that she couldn’t even buy herself pants and instead went shopping for her husband since all she wanted to do was help and push the man she was with.

“Now my eyes are clear. I have become vigilant, all that is left for me is to stay hardworking to support my mother and siblings… I used to be more concerned about others. For that reason, I wasn’t focused on securing personal properties and helping the family. All my attention was on helping the man I was with. I couldn’t even buy panties for myself, I was instead shopping for my man.”

She accepted that both parties made mistakes that led to the breakdown of her marriage, but she never insulted her husband.

“There was immaturity in my marriage. There was pride, ego… things were done anyhow. I am not perfect but there is no way someone can say I disrespected my husband,” she insisted. 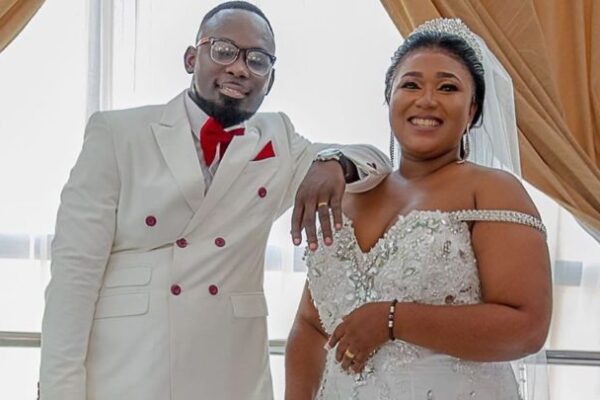 Kaninja, Sports journalist and alleged estranged husband of actress, Xandy Kamel, has subtly reacted to the reports of crisis in their marriage.

In a recent post he made on social media, Kaninja revealed that they were warned of the fight ahead so they were ready before the boxing ring was mounted.

He furthered that no though they are the target, the punches are misdirected and this post can mean a lot of things including his marital issue.

Actress and television presenter, Xandy Kamel, is unfazed by her alleged marriage crash as she reveals she is living a life of no regrets.

Xandy Kamel and her estranged husband, Kaninja is reported to have gone their separate ways just few months after they celebrated their first marriage anniversary after tying the knot in 2020.

Amid the speculated collapse of her marriage, Xandy Kamel wants Ghanaians to know she is happy with herself and where she is now therefore those worried about her over her crisis in marriage are just wasting their time.

The former Angel TV host shared a photo of herself to show that she’s currently at Nogokpo and some fans are wondering what she’s doing there because they are known for their fetishism and anyone who visits there is alleged to go there for such reasons. 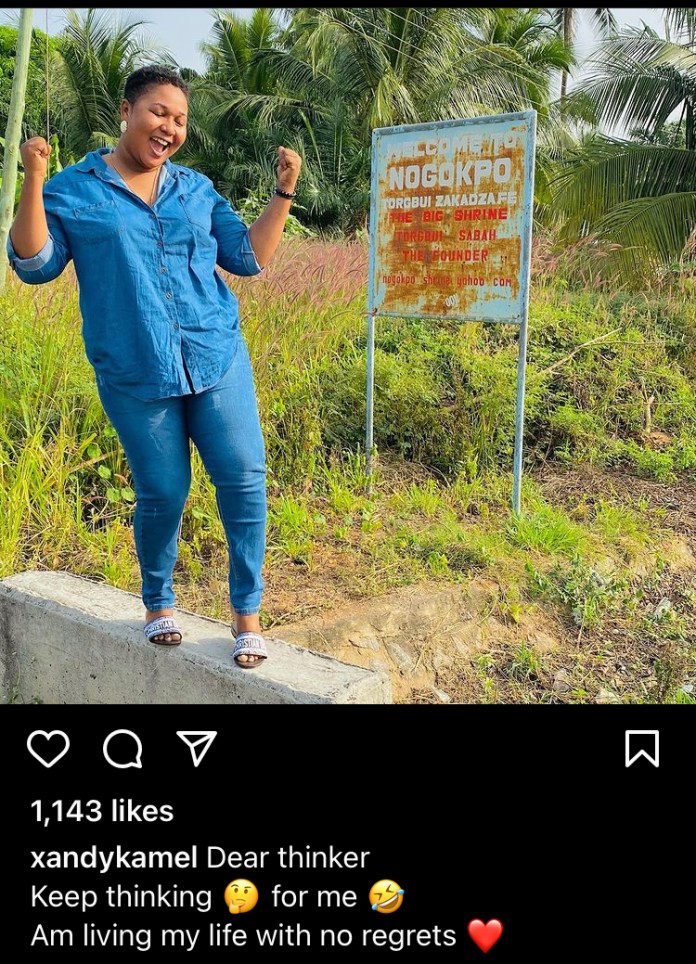 Aggrieved Ghanaian actress and television presenter, Xandy Kamel has said that she has closed the book of marriage in her life following her bitter marital experience.

Xandy Kamel who accused her husband of having extramarital affairs with his ex-girlfriend in an explosive video exactly a month ago is no more living with him in their matrimonial home.

She has indeed learned her lessons and learned it the hard way and has vowed never to marry as she reveals her new goal in life is to make money.

“I don’t want a boyfriend, all I need now is money. A boyfriend is not necessary. No no no, I don’t need a man, in fact, I don’t want to have anything to do with marriage. I will never remarry.”

“I regret that this is my first failed marriage but how many times should I marry? I just want to have fun, explore and make money, travel, spend money and enjoy life, eat good food…just be me”, Xandy Kamel made this pronouncement in a chit-chat with vlogger Zion Felix. 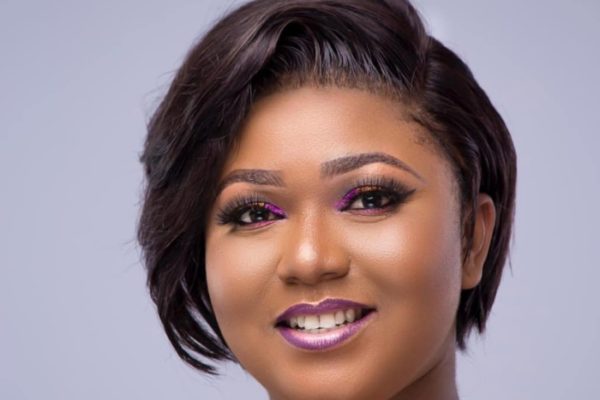 Ghanaian actress and presenter, Xandy Kamel is excited about her new life after her alleged marriage crash that put her mental health in a sorry State as a result of the pain of heartbreak.

Xandy got married to her husband, Kaninja of Angel FM in 2019 but their marriage is reportedly at the verge of collapse as Xandy accuses Kaninja of having extramarital affair with his ex-girlfriend.

Xandy has sent a new message for her cheating husband Kaninja and her haters right after her return to social media in a video she shared on her personal Instagram page.

In the video, the brand influencer is seen singing a song from Daddy Lumba which talked about finding someone better after leaving a toxic relationship.

Xandy who was filled with joy as it could be seen all over her wore a broad smile on her face saying she has become a better person now that Kaninja is no longer in her life and the intention that she was going to die because he left her for his ex failed. 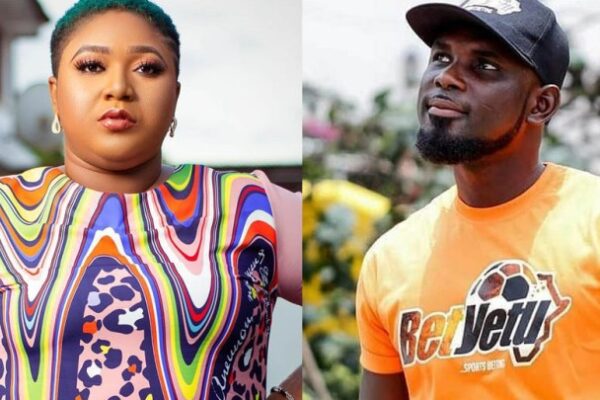 Actress Xandy Kamel has invoked the wrath of the gods on her estranged husband, Kaninja following the crisis in her marriage over which is on its way to collapse.

We have chanced on a video showing the embittered Xandy Kamel uttering irrevocable curses on her husband for accusing her of being a certified lesbian.

Xandy Kamel said that every bad thing her estranged husband has done to him will also happen to him including the shame he has put her and her family through.

She declared that Kaninja will suffer and will never know happiness for the rest of her life.

In a new development to the the flaming marriage crisis of actress Xandy Kamel, she has issued a stern warning to other women not to get closer to her estranged husband.

She claimed it’s true they have issues and their marriage is on the edge of collapse but legally, she still remains the wife of Angel FM presenter, Kaninja.

For this reason, she warned that any woman particularly the side chic who reportedly snatched her husband from her should get ready for serious complications if she opens her legs for him.

Xandy said any woman who allows vajayjay to receive Kaninja’s troubled d1ck will have it stuck inside her and nothing could be done about it. She further said anyone who doubts her should go ahead and validate the authenticity of her statement by getting intimate with her husband. 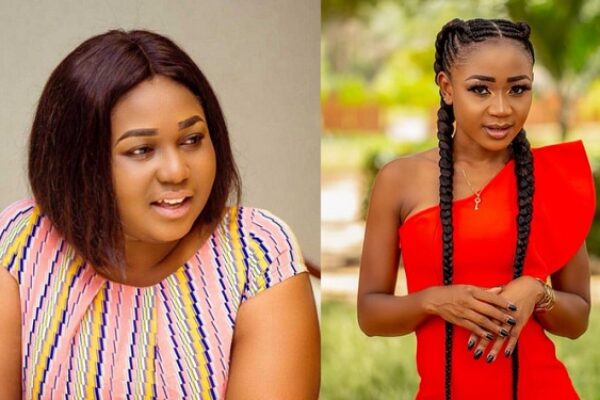 Akuapem Poloo is of the strong view that a cheating spouse is not enough reason for actress Xandy Kamel to think of packing out of her marriage.

According to her, so long as her husband does not emotionally or physically abuse her, she must stay and not think of moving out in search of a better option.

These words were contained in an Instagram post, Akuapem Poloo shared a few minutes ago advising Xandy Kamel to fix her marital cracks, love her man and never leave her home for another woman to take over.

On the back of that, Akuapem Poloo who is a mother of one has counselled Xandy Kamel to stay to save her marriage since a cheating partner is not as worse as an abusing spouse.

She wrote the following:

Dear sis I know you’re going through a lot right now but please sis all I can say is if the man in question is not Abusing you and it’s just about cheating please sis don’t let go the marriage cause let me tell you all men are cheaters don’t leave thinking you will fine a perfect man who doesn’t cheat please 🙏🙏 Our parent went through and still stood by our fathers till now all I will say is nowhere is cool 😢😌 be calm,be prayerful, leave everything to God and you will smile again okay much love Xandy 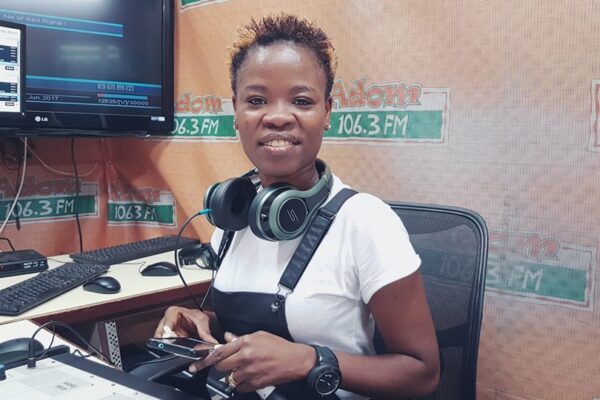 Actress Xandy Kamel has been counselled to treat her marriage and the issues thereof with decorum, maturity and a greater sense of discretion.

Ghana media personality, Ohemaa Woyeje has sent consoling words to the actress following her recent social media outcry over some cracks in her marriage.

On the back of that, Ohemaa Woyeje believes Xandy Kamel needs to learn how to iron out her marital issues with her husband by resisting the urge of washing their dirty linens in public.

In an Instagram post with accompanying photos, Ohemma Woyeje advised Xandy Kamel to find alternative and wise ways of dealing with her marital problems other than sharing them on social media for public sympathy.

She sent the following words to Xandy:

The last sense I learnt was never to discuss my marriage with friends! Marriage is good but never perfect! Marriage is for WOMEN, NOT Girls!

I can feel your pain @xandykamel 😔 but take it easy on urself. People have worse things under their carpet in their marital homes but they polish and show to the public what they prefer to put out!

And when u finally cross this stage, don’t love with ur heart 💜 anymore; But still luv anyway.😁 The first few years of most marriages hits d point of (Near-Divorce) until u decide to stand firm! 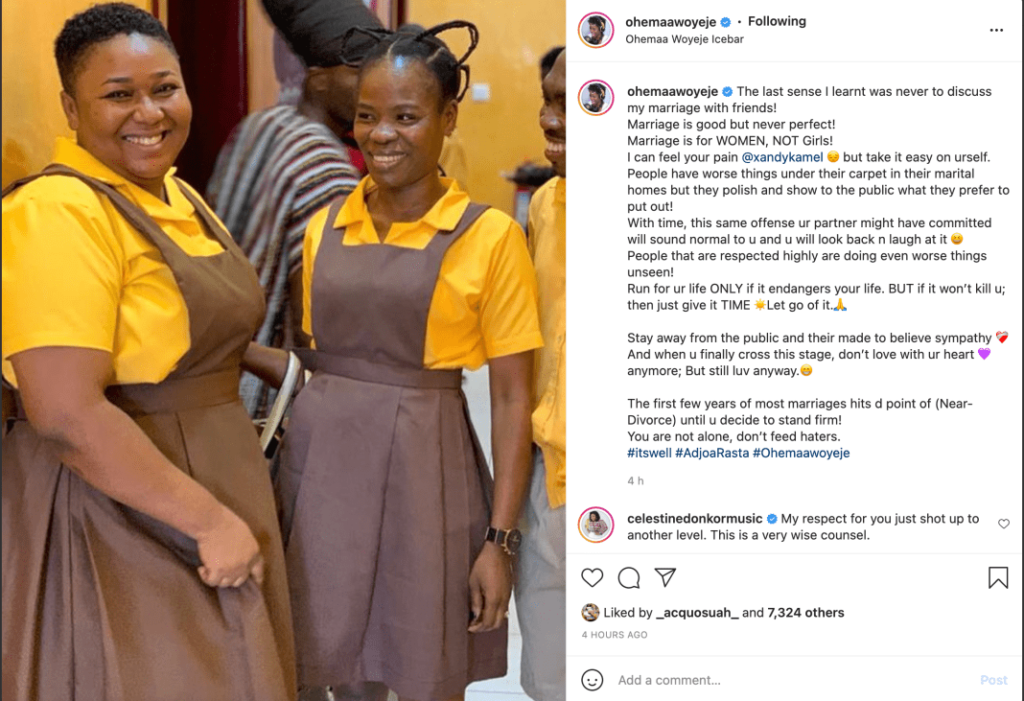